Here you will find fruit horticulture and agriculture tips for an online hort degree program for distance learning but you don't need to be a horticulture major or even working on a bachelor's or Master's degree to use the site.

Over the years I have enjoyed hearing from students, teachers, professors, government officials, farmers, crop industry experts and others from all over the world about fruit crops. If you have a question or comment please do not hesitate to contact me.

Also, please feel free to cite this information without permission for non-commercial purposes.

Thanks for visiting,
Mark

On August 1, 2012, Mark Rieger took office as dean of the University of Delaware's College of Agriculture and Natural Resources.

Rieger served as associate dean and professor in the University of Florida's College of Agricultural and Life Sciences since 2006 and was interim dean in 2010-11. As associate dean, Rieger had major responsibilities in graduate programs, distance education, statewide degree completion programs, the honors program and international education. 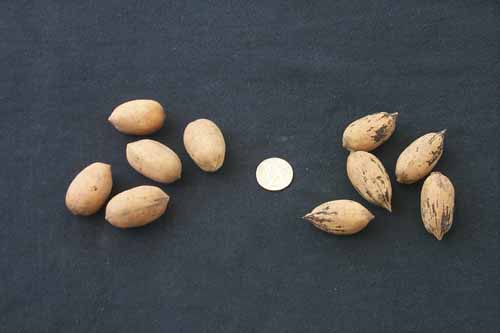 The pecan [Carya illinoensis (Wangenh.) K. Koch] is a member of the Juglandaceae along with walnuts, but is more closely related to hickories than walnuts.

Cultivars
There are over 1000 pecan cultivars documented in the literature, but only four make up over 50% of the orchard cultivation in the US:. ‘Stuart’, ‘Desirable’, ‘Western’, and ‘Wichita’.

ORIGIN AND HISTORY OF THE PECAN (CARYA ILLINOENSIS), HISTORY OF CULTIVATION

Pecan is the most important native North American orchard species in terms of acreage. Pecans were used by Indians at least 8000 years ago in Texas. Crows may have contributed to the selection and distribution process before man, since they select thin-shelled nuts and can carry them several miles. The first budded trees were produced in Louisiana in the mid-1800’s, and orchards were established throughout the native range, eastward and westward. The first commercial shipment of pecans originated in Georgia in 1917, when orchards were already producing high quality nuts graded according to size and color. Georgia has since been the leading producer of “improved pecans”, although collection of pecans from wild trees in Texas and Oklahoma exceeds Georgia’s production in some years.

World – Reliable data are not available, as pecan is a very minor crop. Pecans are lumped together with at least 7 other species of nuts, including macadamia nut, in FAO statistics. Most non-US production occurs in northern Mexico.

United States (2004 USDA) – 82,273 MT or 181 million pounds. The 2004 year was an “off” year in the alternate bearing cycle; more typically 95,000-160,000 MT are produced. The value was $301 million in 2004, and yields average over 1000 lbs/acre., with “on” year yields reaching 2000-2500 lbs/acre.Total pecan acreage has been estimated at over 1.4 million. Pecans are separated into two categories based on intensity of cultivation: improved, and native and seedling. Improved pecans are produced from superior cultivars in orchard settings, while native and seedling production occurs largely from wild-harvested native stands of trees in Oklahoma and Texas.

For the most up to date statistical data on United States and World production numbers please refer to the following two websites:

Plant
Pecans are large, long-lived trees with upright, vase-shaped crowns when open-grown. Pecans are the largest orchard trees in the USA, reaching 60-80 ft tall, and having densities as low as 10-15 trees per acre. Leaves are odd-pinnately compound, with generally 7 to 17 leaflets. Leaflets are lanceolate to obovate, with the proximal half of the blade generally smaller than the distal half (asymmetrical); margins serrate.

Flowers
Pecans are monoecious; male inflorescences are pendulous spikes commonly referred to as catkins. Catkins appear to be borne in groups of 2-3 laterally on 1-yr wood, but are actually produced on extremely short, aborted shoots of current season’s growth. Catkins are 2-6″ in length, and are shorter in protandrous than protogynous cultivars (see below). The female inflorescences are also spikes, born terminally on current season’s growth. Both male and female flowers are green in color, with individual flowers about 1/8″ in size. Flowers are incomplete, and both sexes lack petals and sepals. The males are basically groups of anthers subtended by bracts, and the females are merely an ovary with large, feathery stigma at the distal end, having almost no length of style in between. The ovary wall is fused to bract or involucre tissue in females, and the outer ovary wall plus the involucre become the fleshy shuck of the fruit.

Pollination
In pecans, the period of time over which pollen is shed commonly does not coincide with the period of female flower receptivity to pollen. Thus, pecans often require another cultivar for pollination since the timing of the male and female functions is different on a given tree. This condition is referred to as dichogamy and is common in trees in the Juglandaceae. The two possible forms are protandry (means “first male”), where pollen shed begins before the female flower becomes receptive, and protogyny (means “first female”) where the female flower becomes receptive before pollen shedding begins. A good pair of cultivars for cross pollination contains a protandrous and a protogynous cultivar. In most cases, there is some overlap in the functional periods, allowing for some degree of self-pollination. There is a tendency for protandrous cultivars to have greater overlap or incomplete dichogamy, than for protogynous, resulting in more self-pollination in protandrous cultivars. Some cultivars have no overlap of pollen shed and female receptivity whatsoever (i.e., they exhibit complete dichogamy), and these are sometimes termed functionally dioecious, since the tree is either functionally male, or functionally female at any given time, never both. (This term confuses the fact that all pecans are truly monoecious, just dichogamous, and may be unwise to use in undergraduate courses!). Adding to the complexity of the issue, environment can influence the degree of dichogamy expressed by a given cultivar, and less commonly the type of dichogamy. For example, ‘Barton’ consistently begins pollen shed 3 days before the stigma receptivity period in Las Cruces, New Mexico, but sheds pollen 10 days before in Brownwood, Texas. In Georgia, ‘Barton’ becomes protogynous, and pollen shed begins 5 days after stigma receptivity. Pecans, walnuts, and other members of the Juglandaceae are wind pollinated, and the pollen may travel for miles on a strong wind.

Fruit
Nuts, borne in terminal clusters of 2-10 individuals terminally on current season’s growth. The green, fleshy shuck is composed of bract and ovarian tissue (exo- and mesocarp), and surrounds the nut until maturity. The shuck dehisces along 4 regular sutures, unlike walnuts which lack sutures. Nuts are ovoid, 1-2 inches long, containing a large embryo composed mostly of two cotyledons or kernels. Nut size ranges from 27-100 nuts/lb; “good” size is considered 50 nuts/lb. Cotyledons are separated by a thin, papery central plate extending from the inner layer of the endocarp.

Soils and Climate
Pecan trees prefer light to medium textured soils, pH 5.5-6.0, but can be grown on soils with higher clay content and higher pH. Soil depth should be several feet, with the water table below the root zone during the growing season.
Pecans perform equally well in arid and humid climates, provided with adequate soil water and disease management. Disease pressure is worse in humid climates. The commercial “pecan belt” is the tier of southern states stretching from Georgia to Arizona. Pecans form natural forests along river banks of the Mississippi valley in the south-central US, so a warm temperate climate is optimal for growth.
Cold hardiness is fair; young trees may be killed outright by temperatures of -5 to 0°F. Frost is rarely a problem due to late budbreak.Nuts do not “fill” properly in northern areas, due to inadequate temperatures for photosynthesis during the critical kernel growth period in autumn. Most pecan cultivars require growing seasons of 180-220 days. Chilling requirement is relatively short, 500 hours, but sometimes pecans break bud normally without any chilling.

Propagation
Grafting is the most popular method of propagation. The “banana graft” is simple and increasingly popular for pecans. Seedlings are often budded or grafted in-situ after 2-3 years growth in the orchard, since this is less costly and risky than transplanting relatively large trees from nurseries.

Rootstocks
Pecan seedlings are the most common rootstocks.

As a general rule, 10% of the trees should be pollinizers. In isolated orchards, 2 pollinizers are needed – one early and one late. In orchards near other orchards or wild trees, pollinizers are less important, as adequate pollen from several cultivars is available to the main cultivar. During the first 3 years, trees are trained to a central leader with scaffolds at 12-18 inch intervals, the lowest one beginning at 4-6 ft. After 3 yr, very little pruning is necessary, since trees form a natural, vase-shaped canopy through repeated forking of branches. Only dead, diseased, or broken limbs are removed on a regular basis.

Maturity
Pecans can be harvested when the shuck loosens from the shell, or when shucks split.

Harvest Method
Pecans are harvested with trunk or limb shakers, depending on tree age.

Pecan harvesting equipment. Trunks or individual limbs are shaken, depending on tree size (left). A windrow machine (center) consolidates nuts scattered on the ground into rows over which a sweeper is run to collect nuts (right). Leaves and other debris is separated from the nuts by blowers attached to the windrower and harvester.

Postharvest Handling, Storage
Nuts are separated from shucks, leaves and other debris, then dried in forced-air heaters to a moisture content of 10-15%. Nuts can be stored for about 4 months at room temperature before becoming rancid, but last 1-2 yr when stored at 34 F.

Most of the pecan crop is sold shelled and used in baking and confectionary, particularly around the Thanksgiving and Christmas holidays. Per capita consumption of pecans is 0.4 lbs/year.